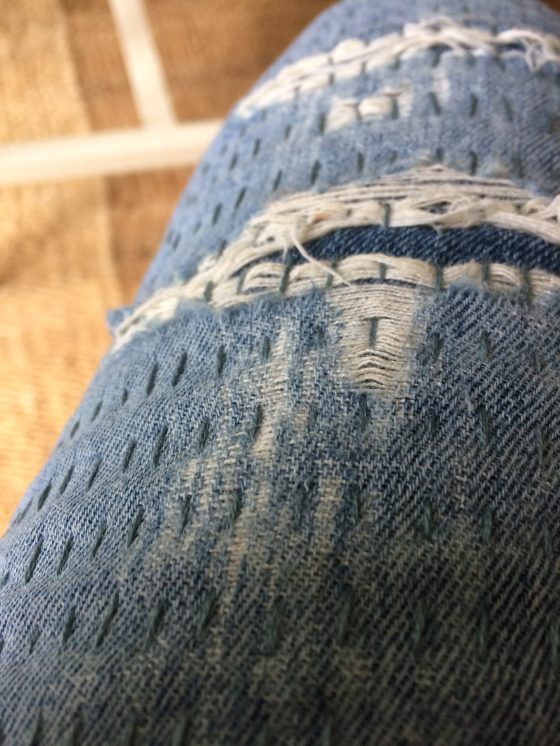 Months ago, I fixed my favourite jeans. They’re 18-ish years old and were getting so threadbare that for a while I was one of those fashionable women who sport jeans with rips in all the right places. When the rips began migrating north, however, fashionable began to verge on risqué, and I knew I had no choice but to toss the jeans or fix them.

So, I took a long length of denim I had previously harvested from a child’s pair of jeans—ones that were too worn to send to Goodwill—consulted a tutorial (and my 20-year-old son’s girlfriend who was visiting for the weekend), inserted the fabric into the leg of my jeans, and pinned it in place. Then I hunted down a box of craft supplies and chose a matching colour of cotton embroidery thread, so the stitches that would need to run the entire length of my thighs would be fittingly quiet.

I cut a long length of floss from the skein, and as I separated it into two 3-strand lengths, the action whisked me back thirty-five years to when I sat on the burnt-orange living room carpet of my parents’ house, my back against the red chair, my teenage self attempting to disappear in the small, meditative Xs of cross stitch.

You see, my mother—now 88 years old—grew up in a time when you did not advertise your mending. If your clothing had rips, rents, holes, or frayed bits, you quietly went about the business of fixing things. Mending was necessary and industrious work, and there was pride in doing the job well, so well, in fact, that the broken parts would be invisible.

So, here, dear reader, is where this post goes sideways. It’s where instead of doing the normal and expected thing—presenting a tutorial for visible mending—I follow a completely different thread:

On the morning of the summer day that I finally mended my pants, I spent hours sitting at the kitchen table with my son’s English-major girlfriend, discussing a letter I was writing to the editor of my local newspaper. My son’s girlfriend had recently completed a course titled Writing for Social Change and I was unashamedly picking her brain.

How do we effect change? I asked her. I was burning with the need to respond to a letter in the newspaper that argued Canadians needn’t bother even trying to address climate change because the collective carbon footprint of our small population is too low to matter.

Do facts work? I asked her. What about shame and blame? How about appealing to self-esteem? What about—and here I peered once again at the letter I was composing on my computer—sarcasm and satire?

After hours of agonizing over every word and comma, I hit send.

And then, dear reader, I was blindsided by a wave of anxiety, sickened by panic that was compounded with a side-serving of shame: my son’s completely normal and well-adjusted girlfriend saw my distress.

Take a walk, she instructed.

And I did: I left the house, walked along the lake, tried to breathe, tried to tell myself that everything—the letter to the editor, the outing of my apparent mental illness to my son’s girlfriend, the upcoming federal election*, the impending loss of civilization due to catastrophic climate change, the not-knowing what to cook for supper—would be okay. But it wasn’t until later in the day, when I threaded my needle with embroidery floss and ran those stitches up and down, up and down, up and down that the anxiety finally eased up.

If you’re a regular reader, you know that things have been quiet around here. I have lots of good excuses, but it all boils down to the fact that I have been allowing anxiety to win.

Two days after sending my letter to the editor, I got a response: Yes, this is interesting and we’d like to publish it, but it’s too long. Can you get rid of 100 words?

So, I shaved 100 words and made the piece tight and focused, but instead of sending it back, I sent an apology. I’m sorry for the inconvenience, I said. But I would like to withdraw this piece. I wrote in anger and frustration, and this will only make things worse.

The editor wrote back with unexpected kindness: He said he understood, said I was a good writer, said if I ever wanted to write another letter, he’d gladly publish it, said—if it made me feel better—that another person had stepped up and written a strong rebuttal to the original writer.

And, dear reader, it felt like such a reprieve—until, you know, it didn’t.

This kind of fear is hard.

Speaking—sending words out into a world that has become unbearably ugly and polarized—has gotten me into trouble over these last few years. It got me thrown under the bus by the PTO. It isolated me. It sent me to therapy.

She said, Better to speak, then.

But I can’t help but think that part of the reason the world is in the state it’s in is precisely because we have fooled ourselves into thinking invisibility means non-existence. We have pushed all the broken bits out of sight, shifted the consequences, and taken advantage of those who don’t have the power—or the ability—to speak. I think if we are to have any hope of fixing this world, we have to make all of our brokenness—and our mending—visible.

*On October 21st, Canada elected a minority Liberal government. This means Justin Trudeau is still the prime minister, but he will have to work with other parties to get things done.

View all posts by Marian

This thinker would love to know what you think ... thank you for taking the time to leave a comment! Cancel reply