About ten years ago, I sewed a bunch of really ugly produce bags:

I wrote a painfully long-winded post about these bags shortly after I started this blog, in which I explained that one day I didn’t see plastic produce bags, and the next day I did.

So: I searched my fabric box and chose the most lightweight material I could find—a length of hideous curtain lace that my mother-in-law had probably bought on clearance and kept for a dozen years, before de-stashing and re-homing with her too-kind-to-say-no daughter-in-law, who—probably five years later—did the merciful thing (because fabric wants to be useful) and whipped up some reusable produce bags.

My children—especially my daughter—were horrified.

Why—WHY?!—do you have to be so weird, and NO, I am NOT going to take one of these bags and put apples into it, thankyouverymuch, because we are in PUBLIC (!) and who knows WHO might see us here, and . . .

Ten-ish years later—ten-ish years during which I wore my children down and they willingly participated in my madness and I saved approximately 2000 plastic produce bags and my daughter got her own set of reusable produce bags (non-hideous ones which I bought for her stocking two Christmases ago)—my daughter goes shopping in a new zero-waste bulk store in the city in which she lives, and she texts me this photo: 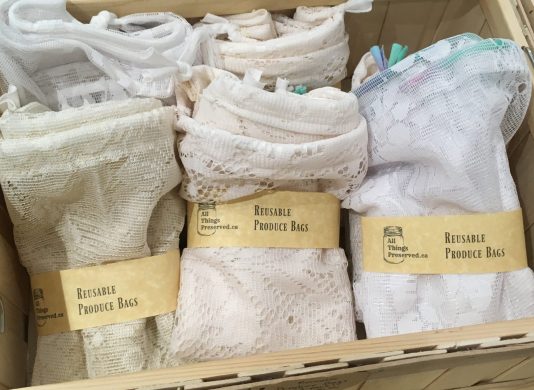 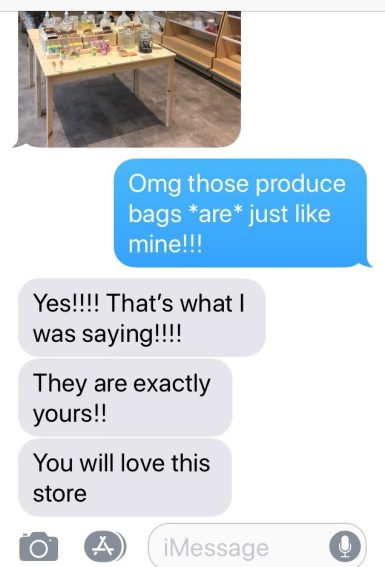 Oh my. I think I will. (And I think I have to email the woman behind allthingspreserved.ca, so I can learn the story behind her produce bags.)

This post is a positive offering for the Ten Year challenges that are swirling around on Facebook and Instagram. So many of the pictures are so disheartening, but there are also so many positive things happening, especially in the zero-waste movement.

Zero-waste stores seem to be popping up everywhere—we even now have a tiny store, in the very small and not especially forward-thinking city in which we’re currently planted, a place where I can get bulk dish soap, laundry detergent, shampoo, and toothpaste. And while I know (I know!) that 2000 plastic produce bags saved—or two shampoo bottles, or three dish soap containers—won’t save the world, I can’t help but see all these little things as gateways: little things that can lead to other little things that can lead to bigger things, that can lead us from simple addition all the way to multiplication. Ripples to waves, in other words.

In other ten-year news, it’s ten-ish years since my daughter pushed her pork chop away and declared herself a vegetarian.

Why—WHY?!—do you have to be so difficult, and NO, I am NOT going to be cooking separate meals for you, thankyouverymuch, because that is doubling my work in the kitchen, and . . .

Ten-ish years later—ten-ish years during which she stuck to her guns and her little brother joined her and I learned even more about cooking and I gave up processed food and we all fully joined her and Oh She Glows became my Bible and her father went down two pant sizes—Health Canada ignored industry pressure and released a new food guide, which recommends a mostly plant-based diet.

Just to be clear: There’s is no connection whatsoever between my daughter becoming vegetarian and Health Canada releasing its new food guide.

There’s only this: Ten years will pass no matter what. And when we come upon new ideas or are faced with new realities, we have two choices: We can flat-out refuse to go or be pulled along protestingly, or, we can open our hearts and minds to new ways of doing and seeing. And if we open our hearts and minds, we might just be very surprised—and grateful—to see where we end up ten years later.