I never used to be a dog-earer of books.

Books, it seemed to me, were *this close* to being sacrosanct, and as such, were things that one shouldn’t mark up, mar, or mutilate in any way, shape or form.

But lately, I find myself so moved by what I’m reading that — not content to merely pass by truisms that speak to me — I’m needing to mark them.

Here’s one such truth I recently came across, from Matt Haig’s Reasons To Stay Alive:

If you are the type of person who thinks too much about stuff then there is nothing lonelier in the world than being surrounded by a load of people on a different wavelength.

The only thing I would add to his words would be the qualifier, And during the holiday season, when seemingly *everyone* (except you) is hohoho-ing, this loneliness will be magnified ten-fold.

So … where the heck have I been since mid-November?

I knew, when I happened across this scene in my local big box home improvement store on October 5th (OCTOBER 5th!) — 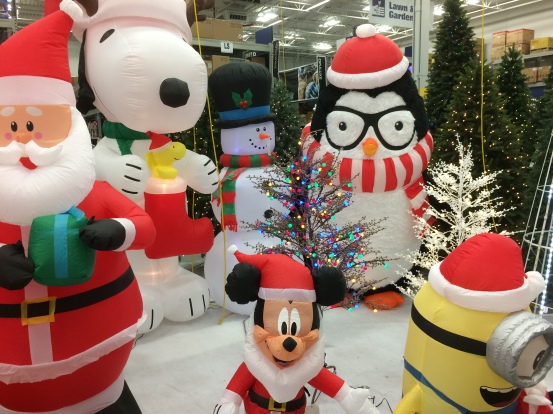 — that it was going to be a grumbly kind of a fall.

The words “going to be” are inaccurate, of course; my grumbly-ness is a humming continuum that began who-knows-when, but was last mentioned in this post, in which I reported that I had spent the last part of August in high dudgeon, flinging open cupboards, hunting and purging as though my life depended on it.

Well, what I didn’t mention in that post was the fact that my 12-year-old son was going through a similar phase:  “I feel like my room is too full of stuff,” he told me one scorching August day.

So, with my help, we embarked on a major clean-out of his room. We went through his closet, his desk, and his bedside table, and we got rid of a heckuva lot of crap.

(I feel it’s important to note that what I consider to be a heckuva lot of crap is probably minuscule by other people’s standards.)

Because I am a see-er of all the stuff, a noticer of everything, it was interesting to observe him as he went through the process of deciding what to keep and what to get rid of. He is the least sentimental of my three children, and as such, he had a fairly easy time making his decisions. The thing that pulled him up short, though, and caused him a bit of angst, was the actual fact of disposal. After making sure to recycle anything that could be recycled, and after setting aside those items we deemed were ok to donate to Goodwill, he was still left with a pile of items. And as he looked at those non-recyclable, non-donate-able items, as he picked up each one individually and turned it over in his hands, several observations came flowing from my deep-thinking boy:

My son’s exercise in purging reminded me of a show I watched just after we moved back to Canada seven years ago.

Now, I should explain that our family has had three major moves over the past twenty-one years, and although they’ve all come with their unique challenges, this last move was the one that nearly did me in.

With little to choose from, we naively bought a fixer-upper, a house brimming with “potential”. My husband moved here six weeks ahead of the kids and me and began his new job, spending his lonely evenings stripping wallpaper, and hiring a contractor who began gutting the laundry room. When we joined my husband the house was in a state of upheaval.

And when our moving van arrived and deposited all our stuff into the midst of that? 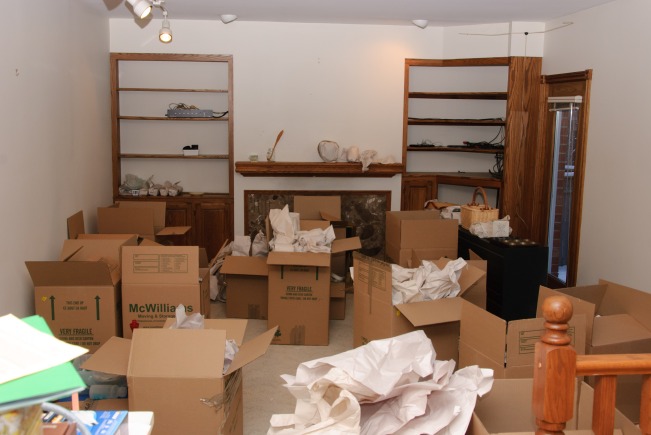 In an effort to make myself feel better, I did two things:

First, I set gratitude mantras on replay in my head:

And secondly, I also began (in my evening downtime, when I wasn’t scrubbing wallpaper paste or mudding-and-sanding damaged drywall or cursing the original owners to hell-and-back for (evidently) allowing wallpaper to be applied to unprimed walls) to watch Hoarders and what was probably a little-known show on HGTV-Canada called Consumed.

If you’ve ever watched Hoarders you’ll know it’s an utterly painful and pitiful watch. But Consumed (which could be termed Hoarders-lite), was somehow less disturbing. The show featured “normal” families whose homes were (somehow, someway) overrun with stuff.

This was the way the show worked: after allowing the families to select a set number of items to keep, the remaining contents of the house were boxed and carted off to a warehouse. The family then spent a month living in their bare-minimum house, and after enjoying the freedom of living in an uncluttered environment (because yes, they all *did* seem to enjoy the experience), they trooped to the warehouse where they were forced — under the pressure of time — to sort through the entirety of their possessions in order to determine what to keep and what to toss.

— this show added one more item to my gratitude list: however overwhelming our living situation was at that moment, however resentful I felt at becoming Chief Shuffler Of Stuff, however angry I was that I had somehow allowed my life to be taken over by a house … things were at least NOT AS BAD as they could be; obsessive squirreling of sentimental items aside, I was at least not (quite that much of) a hoarder.

Now, although it’s been at least five years since I’ve watched this program there’s one clip from one particular episode that still runs through my brain, as it did that day in August as I was helping my son to clean out his room, and as it did this December, when I went to the mall, feeling the weight of holiday expectations and the pressure to provide *something* in the way of Christmas presents:

There’s a girl, blonde, about 14 years old. She’s standing in a warehouse, and she’s surrounded on all sides by boxes upon boxes upon boxes — some closed, some opened, some unpacked, the detritus on display for all to see.

This is ALL her family’s stuff, and she and her family are working against a ticking clock, a TV camera documenting the painful indecision that marks each and every decision. And suddenly, after working for hours, this girl has had it, and she upends a huge box of plastic toys directly into a large garbage bin.

Over-thinker that I am, that scene never fails to elicit the following grumbly questions:

What was it all for anyway? Why were those crap toys made in the first place? For five minutes of fun? And then, once the *actual* fun was over, what were they good for then? To sit on a shelf, on display? To gather dust? To be crammed into a drawer? To clutter up this girl’s life, to make her room — and her house — so fucking full she and her family required an intervention?

I realized something this December, when I looked at my 12-year-old son’s Christmas wish list and saw that he hadn’t even asked for a LEGO Architecture set:  I am now on the POST-TOY side of parenthood.

The hard truth that I’ve come to over the years is that so much of what gets brought into our children’s lives constitutes junk, and while there may be small hits of pleasure at the moments of receiving and the moments of giving, the net cumulative effect isn’t a positive one; I think it’s actually damaging — to them, to us, to our relationships, to the environment.

— the stuff STILL seeps in.

It comes from well-meaning grandparents, from teachers rewarding good behaviour, from school fundraisers, from fast food restaurants, from informational giveaways, from sports organizations, from birthday parties … it enters our children’s lives and sits there, until — at the age of 12 (or 14, or 18, or whenever they’ve said why the heck do I even have this) — it gets swept ignominiously into garbage bags and set out on curbs and trucked out of our sight.

At which point, the over-thinking grumblers among us may reflect, What was it all for anyway? Why do we do* this?

I think we do it because it’s fun, because it’s expected, because everyone else is doing it, because it was simply there — on sale! and so irresistible! — in Wal-Mart.

I think we do it because although we recognize monetary costs we still don’t understand (or we refuse to see) the connections between the things we consume and the raw materials and energy it takes to create them.

I think we do it because enough is a concept we continually struggle with.

I think we do it because saying yes is easier than the thought that we will be perceived as a crank.

Of course, this fear of being perceived a crank is really what this post — and my silence since November — is all about.

But I suppose, if I want others to speak their truths, then I have to be brave enough to speak mine, even if I come off as a crank.

*”We” refers to both me and the royal we-as-a-society; the active verb “do” is equally interchangeable with a passive how the heck did we allow this to happen?

View all posts by Marian

10 thoughts on “Reflections From Post-Toy Parenthood”

This thinker would love to know what you think ... thank you for taking the time to leave a comment! Cancel reply