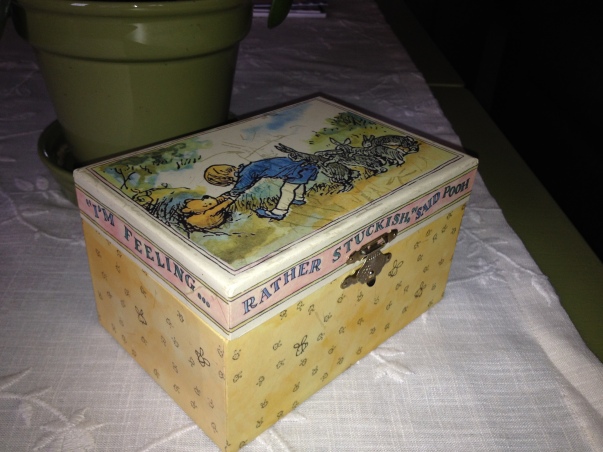 This music box perfectly sums up where I am these days. Like Winnie the Pooh, being pulled from a hole by Christopher Robin et al, I too, am feeling rather stuckish.

My last post, a plea for advice as to what a (mostly) vegetarian host should do about meat-loving omnivores coming to town, was SIX weeks ago!

(The older I get, the faster time seems to be passing, something I find distinctly alarming).

How did six weeks get away from me?

It’s been less than a month since our daughter came home from her first year of university. Conveniently (said tongue-in-cheek), she returned a mere two days before company arrived for my husband’s 50th birthday celebration.

My husband fetched our daughter and her “stuff”, a packed-to-the-brim van-load of everything she had brought to — and accumulated in — her dorm room over the course of eight months of study, all of which was unceremoniously dumped — suitcases, laundry baskets, duffel bags, books, food, tea (the tea! Oh. My. Gosh. the quantity of tea!) — filling our foyer, obstructing the hallway, tossed into the laundry room, strewn about the kitchen.

Did I mention the part about this happening TWO days before company arrived? Yes, well, we took care of what we could, stowed the rest in the basement, got the house cleaned and ready for company …

Company came and went in what now seems like the blink of an eye. Many thanks again for the comments and suggestions from Rita, Sarah, and Kate. The non-vegetarian meal — salmon, something I usually botch — was made with assistance from my sister-in-law, and was greatly appreciated by the omnivores. The vegetarian meal (enchiladas from the Oh She Glows cookbook) were a hit with everyone, omnivores included, who were pleasantly surprised that a vegan dish could be so satisfying. After the meal, my sister-in-law told me the next time they choose a recipe from the Oh She Glows cookbook (which they own as well) they will make it as directed and not feel the need to add ground beef. (This made me smile 🙂 ).

The day the company left was the very day the book fair arrived at the elementary school. I got one bed stripped and one set of sheets in the wash before heading out to help set up what was to be our school’s third Crap-Free Book Fair, all the while hoping the washer wouldn’t leak or catch fire.

Four full days of book fair … set-up, sales, take-down … with not one child (nary a single child!) asking why we weren’t selling novelty items … intermingled with the aftermath of company and getting everyone back to their proper beds …

I had been hoping, once life was back to steady-state, that I would be able to slide back into blogging. (Not that I’ve been a very prolific blogger; my initial one year term is coming up with my host and I have only 15 posts published).

But I’m feeling a bit stuckish.

I started this blog for two reasons:

First, because I was tired of writing greengreygezellig pieces only in my mind. Does that make sense to anyone else out there? Are there other writers (or “writers”; I can’t manage to think of myself as a writer sans quotation marks) whose minds narrate a running stream of essays or arguments, searching, sometimes stumbling, trying to find the perfect word, the perfect sentence … but the words never actually make it out through their fingers?

Yes, well, writing aside, the second, and perhaps bigger, reason I started this blog was because I wanted to try to make a difference in this world.

A year on, and I’m losing the naïveté that once led me to believe that my small life and my even smaller blog could make a difference. And as I look over my dozen or so half-written and unpublished posts, I recognize a problem: some verge dangerously close to haranguing — or at the very least, are only going to be read by those already in the choir — while many of the others seem (in my mind, at least) positively frivolous in comparison.

As an accidental this-is-where-circumstances-have-led-me-but-I-can’t-quite-believe-I’m-still-a-SAHM, frivolity is unfortunately something of an anathema to me. I’m what one might term a workaholic SAHM.

My days are measured in what I’ve accomplished: the healthy meals I’ve cooked for my family, loaded with veggies painstakingly chopped; the cookies and muffins and bread I’ve baked with whole wheat flour and flax; the rugs I’ve braided and sewed using fabrics from my stash; the clothing or curtains I’ve constructed; the mittens I’ve knit to keep my children’s hands warm; the square footage of walls from which I’ve scrubbed wallpaper paste, then repaired and repainted; the vegetable garden I tend; the books I’ve voluntarily filed in the school library; the class-loads of children who’ve sat with me in hallways, learning or honing their reading.

It’s interesting (to me, at least) that although I spend my days wearing these various hats (chef, baker, seamstress, knitter, handywoman, gardener, volunteer … ) and although I can see perfectly well, thankyouverymuch, that these are not frivolous tasks … the moment I publish a post about them (such as when I talked about re-purposing our crib, or, more recently, when I talked about hobbies and posted pictures of needlepoint and knitting), I immediately feel as though they just might be. And, that I seem to be trying overly hard to justify my existence. It’s a bit like I’m saying, Yes, I’m a SAHM … but see? See? I don’t spend my days watching soap operas and sipping coffee!

But the second, and perhaps more troubling thing? These posts have felt distinctly — uncomfortably — braggy. I didn’t provide a tutorial. I didn’t contribute anything of value. I simply added yet more noise to an internet which is already bursting with picture-perfect look-at-me! posts, many of which only serve to cause those looking in to feel inadequate about their own lives. Worse yet, I fear (completely unreasonably!) that posts like these are going to lead me down a path I don’t want to go, that it’s akin to teetering on the edge of unspeakable fluffiness and I just. might. possibly. one day find myself demonstrating how I spray-paint plastic dryer vent piping orange in order to dress my table for Halloween!

/ runs screaming from the computer /

(I hope it’s clear that I don’t — that I have never and will never — spray-paint dryer vent piping orange to make mock pumpkins for Halloween. And I’m sorry, I know this is going to sound incredibly snobbish, and I should just shut up right now but I can’t seem to stop myself … but I would be lying through my teeth if I provided the cursory and somewhat obligatory, But hey, whatever floats your boat!; Way to go!; How creative! to the people out there who do such things).

So yes, now that I’ve potentially offended half the internet, I’ll turn to the other non-published, half-written posts I have lined up in the queue: all of the ones in which I verge on haranguing, all the ones which convey messages that drone on like the same old broken record, all the ones that I know are simply preaching to the choir …

Are you starting to see why I’m feeling rather stuckish?

Gosh, this is starting to sound like a So Long, and Thanks for All the Fish farewell post!

And what’s worse than feeling like a cop-out? The sneaking suspicion that I’m letting fear rule this blog. I’m reticent to post the hard stuff — the please-think-about-this-and-start-to-connect-the-dots stuff, the please-think-about-future-generations stuff — because I’m still the quintessentially-polite stereotype-of-a-Canadian who worries overmuch about causing offence.

Perhaps instead of worrying so much, I simply need to trust that the readers I do have — people I’ve come to consider friends — will be willing to engage in conversations about the difficult stuff. And perhaps, seeing as I’ve been  — sigh …

… perhaps, as I somehow seem to have this analytical mind that extrapolates, that reaches for the corollaries to arguments, that sees the details as well as the big picture (in other words, the ability to see the forest as well as the trees); and perhaps, because I believe, rightly or wrongly, that it’s possible to be tactfully forthright, to call a spade a spade without metaphorically knocking someone down while doing it, I need to place more trust in the power of words, and simply continue to hope — however naïve and misplaced that hope may be — that my words might just make a difference after all.