I spent a good half hour wandering about the yard yesterday, gardening shears in hand, trying to decide whether I had the means and ability to turn this: 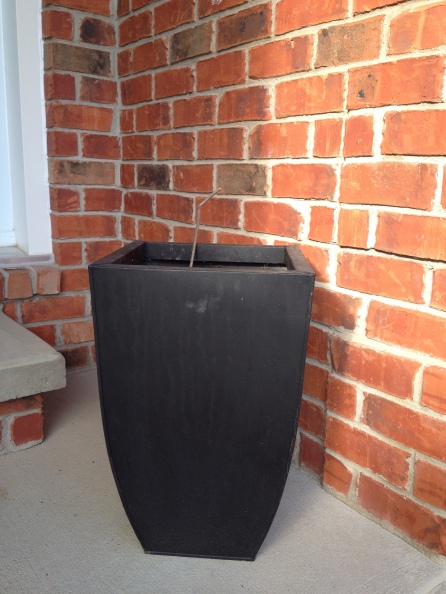 into something resembling this (available for sale at our local grocery store): 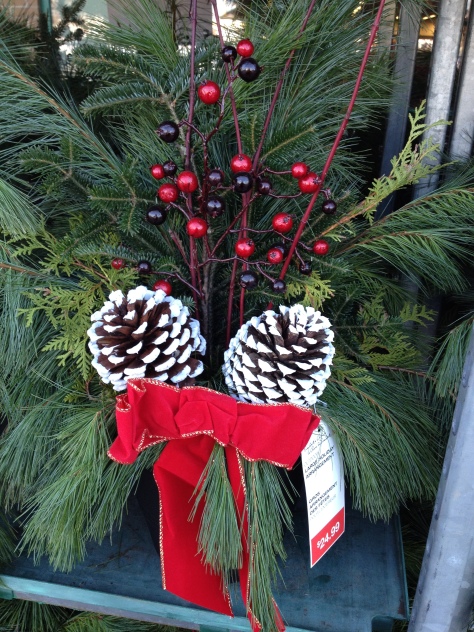 It’s that time of the year and the pressure’s on.

Our neighbourhood is beginning to look positively carnival-like — houses and trees are bedecked with lights; wreaths are hanging on doors; there are pots of greenery brightening up stoops; towering blow-up Santas and snowmen are aglow, swaying gently back and forth in the night breeze (let’s ignore the fact that they look macabrely dead when deflated on the lawn during the day). In comparison,  our un-lit, un-bedecked, un-ho-ho-ho house stands out like an unruly front yard vegetable garden in a sea of clipped suburban perfection.

After all, there’s a certain expectation around this time of year, isn’t there?  Unless it’s absolutely certain that you’ve got roots in another religion, it’s almost seen as curmudgeonly to neglect that communal duty.   Even friends who know you well can hardly seem to help themselves from calling you a Scrooge — smilingly — and telling you to at least hang a wreath, for goodness’ sake!  And when you point out that you do have a wreath — a plain grapevine ring that you’ve had for years and into which you’ve stuck three sprigs of pine (can’t they see it’s right there on the door?!) — they look at you with an almost piteous expression.  Dial it up a notch! they seem to be saying. You’re letting the rest of us down!

Once-upon-a-time — when we first moved into a house — we did what we felt was expected:  we put exterior lights up.  But because my husband has a slight phobia about heights, asking him to climb an extension ladder to get to the upper eaves was like asking Ron Weasley to walk through a nest of spiders. So although we had lights, they always had that unbalanced, well-we-tried-but-didn’t-quite-pull-it-off half-hearted look about them.

And then, one year, when the children were very young, my husband turned from the tangled string of lights he was trying to sort out and said, frustration in his voice, “You know, I’d much rather be playing with the kids than having to put up these stupid lights!”

Yes, it was a Becoming Minimalist moment (a good ten years before Joshua Becker came to the same epiphany while organizing his garage).  What’s more important? Pulling the kids in a sled around and around and around the snow-covered yard?  Or hanging Christmas lights?

The time involved in decorating is one of many reasons our house doesn’t look like it could be in a magazine spread, inside or out. Although I appreciate a comfortable home, I’ve never had aspirations to be a designer.  A baker, yes!  Ask me to make a Christmas stollen and I’ll find a recipe and give it a whirl.  A seamstress?  Sure!  I’ll sit in front of the sewing machine for hours, whipping up gift bags without a second thought.  But ask me to shop for non-food, non-fabric related stuff?  And then tell me I have to figure out how to arrange the stuff in my home?  Um … yes, well … I think I’ve got a headache; I’ll just lie down for a bit …  Add into the mix a latent tendency towards minimalism and a  whopping case of OCD, and the result is that the process of seasonal decorating — a fun, festive, joyous thing-to-do for most people — tends to have the opposite effect on me:  it makes me feel vaguely grumpy and unsettled; I’ve spent time I’ll never get back and now everything’s out of place!

So what reasons have I listed so far?  Time, lack of perceived ability, minimalism, OCD …  oh yes, there’s also storage of the stuff in the off-season, another roadblock I set up … did I mention this was going to be a meandering post?

(Anyone still with me?  No?  Well, that’s probably for the best, because religion is coming up, and that’s one of the things we’re not supposed to talk about … )

Rewinding back to the day my husband was resenting the time (and lack of danger-pay) involved in installing lights on a house … that year also marked something else: the beginning of a sudden dawning of discomfort with the whole Christmas season. We had just — a year and a bit before — moved from Canada to the US, and we were coming to the uncomfortable Dorothy-esque realization that we weren’t in Kansas anymore.

Born and raised in a large, multi-cultural western Canadian city, it was routine to be nominally religious, to perhaps go to church for the biggies (Easter and Christmas), but to not give religion much of a second thought otherwise.  Suffice to say we were completely unprepared for the conservative Christian environment we had inadvertently moved into, one in which the most common first question upon meeting someone, after the obligatory who-are-you and how-do-you-do, was “what church do you go to?”

If we made it past the point of that question (which we rarely did; an answer of “no church” was usually met with a rapid excuse to disassociate and move on), then the questions and comments down the friendship road often held implied — and sometimes overtly-stated — pressures and admonishments:   you’re not religious; why are you putting up a tree?!  Why are you even celebrating at all?!  I wouldn’t celebrate something if I didn’t believe in the meaning behind it!  It’s Christmas … Christ’s Mass, you know!

While my husband’s response to all this was a shrug and a blithe We put up a tree because we’ve always put up a tree,  I found the questions a bit more troubling.

In fact, for me, our eleven year stint in the US marked a time of deep philosophical and existential questioning.  Although there’s nothing like having children to make you ponder the universe and your part in it, there’s also nothing like having the four year-old daughter of a friend tell you that you and your family are going to hell to make you ponder more than just the basics.  All the normal questions that come with parenting — what are we going to teach the children?  what traditions are we going to continue?  — suddenly became tainted and fuelled by an uneasy sense of hypocrisy. What did I believe?  Why was I continuing our childhood traditions when I wasn’t sure I agreed with what was behind them?  Did I even have the right to do so?  Was I a hypocrite?

So I read.  And read.  And read.  I learned about Saturnalia, a Roman festival which involved winter solstice feasting and merry-making.  I learned that the practice of bringing greenery into the home stems from pagan traditions, in which greenery symbolizes life returning to the earth after the darkness of the winter solstice.  I learned that far from being set in stone, no one really knew when Jesus was born, and that the Puritans eschewed the celebration altogether.  And as to giving presents? Oh, what a relief to find the website Parenting Beyond Belief and to realize we weren’t celebrating Christ’s Mass when we wrapped presents and set them under the tree; we were celebrating Krismas!

(It seems to me, given the history and evolving nature of the holidays, given the fact that Hanukkah and Kwanzaa fall into the season as well, that there’s room in December for people from many walks of life.  And, if the season is ostensibly supposed to be about peace and goodwill, perhaps the people who are boycotting stores solely because salesclerks are saying Happy Holidays rather than Merry Christmas would benefit from doing a bit of reading themselves.  I’m just sayin’!)

So with all that, one could safely assume I was good to go.  I could put up the tree and deck the halls and …

Yes, well,  except there was still one little thing bothering me:  that thing called the environment.

(I know.  I’m becoming a broken record.  Even I’m starting to get bored by me).

Soldiering on, regardless … It’s no secret that the holidays can have a huge environmental impact. The decorations, the trips to the mall, the crappy obligatory presents, the wrapping paper, the trees, the electricity that powers the carnival of lights and blow-up Santas …

So how do I make sure we have as low an impact as we can without being a total Scrooge?  As I’ve already said, we don’t do exterior lights. We have a real tree, which is better choice, environmentally, than a fake tree, and we recycle it afterwards. I have a red tablecloth or two to brighten up the kitchen, and submerging my OCD and minimalism for the sake of the kids, I arrange a few decorations on the mantle (mainly wooden or metal trees I’ve gathered over the years). I hang a fabric decorate-the-tree Advent calendar made by my mother, and I put up whatever decorations the kids have made in school over the years.

And coming full circle, back to that pot at the front door, well, here’s the story with that…

Last year, determined to have a pot of greenery to brighten up our stoop, determined not to be the only house in the cul-de-sac with zero holiday spirit (and, more importantly, to satisfy my nine year-old son who seemed to think we absolutely needed something — c’mon, Mom! — on the house to show Christmas was coming), thinking natural is best, and I have a pot; surely I can make my own arrangement, I went to our local greenhouse.  And what should I find amongst the boughs of eastern white pine and curly willow, but bunches of BC cedar.

Slightly aghast, thinking that can’t be right; they can’t be trucking branches across the country, I asked the saleswoman:

“This says BC cedar.  Does it actually come all the way from British Columbia?”

Her response:  “Oh, are you one of those local people?”

*Local*, in Canada, poses innumerable difficulties, and although we can try our best, we can’t do local for everything.  We’d never be able to eat a banana or an orange. But I can’t help but argue that for certain things — like tree branches! — we should probably be thinking really hard about how far we’re trucking them.

So last year’s compromise was a potted false cypress.  I thought it was a good choice because I’d be able to plant it in the yard come spring, but it unfortunately didn’t make it through the winter.

This past summer, in our continuing efforts to re-landscape a yard ravaged by the Emerald Ash Borer, we did more plantings, adding a red-twig dogwood and three cedars to the pines and burning bush and various other trees and shrubs we’d already planted.  Hopefully a bit of December pruning won’t hurt them, because one thing’s certain:  you can’t get more local than your own backyard … 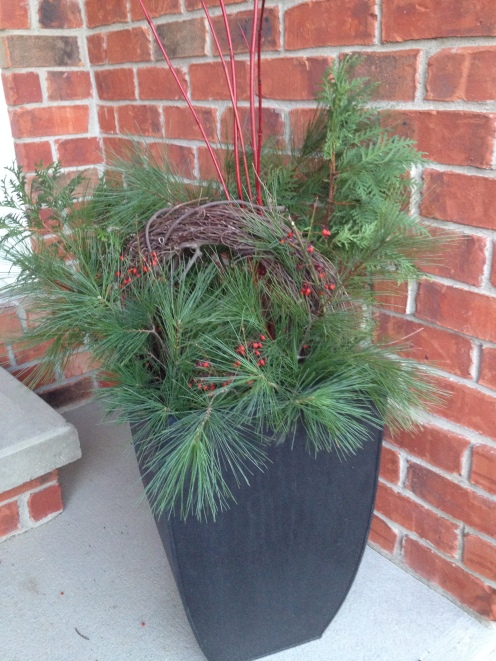 (Hmmm … I really need to clean that pot … and should the cedar sprig on the left be moved more to the centre? … and maybe I need a red bow on the grapevine wreath or on the — Oh, darn!  I think I hear the oven beeping … I’d better go check … )